When I’m doing a sports massage there is always a silent assistant lurking in the corner.  His name is George and generally people find him very helpful. Once they’ve got over the shock that he’s there.  Of course, as a skeleton, he’s become famously enigmatic.  For a start, there’s the question as to whether he is actually a he.

This question first cropped up quite early after he arrived.  Peering closely, I was asked by a friend if it was a female because there was a full set of ribs. The presumption was that if it was a man, there would be one missing.  After pointing out that the rib business was was a myth we had to laugh. But thinking about it more seriously, I did start to wonder about whether the gender of a resin-based skeleton was given any consideration.  On this basis I decided that the narrow hips made it more likely to be male.  It was admittedly a dubious premise for a hypothesis but it was better than nothing.  To be honest I don’t know why I settled on George but people like it and it seems to suit him.

People like to examine George to see where exactly where all the bits and pieces fit.  My favourite was the plumber who came to mend a pipe but turned out to be really curious to find out where the infamous metatarsals were that caused David Beckham, and England, so much trouble. George, as ever, was ready to help. 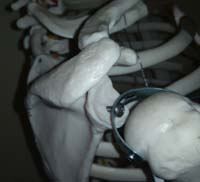 But people are really surprised to see that the scapula is only attached to George through screws down the medial side of the scapula – that’s the longer side nearest to the spine.  Otherwise the only thing keeping it in place is the very small joint that joins the spine of the scapular to the clavicle, the Acromionclaviclar joint. Otherwise it is just muscles and the other soft tissue keeping it in place, such as the serratus anterior.

A serious limitation for George, and skeletons in general, is the lack of flexibility.  I once spent an entertaining afternoon trying to see if this could be overcome.  So how to make a skeleton on a pole move and try to capture it on film at the same time?  Not easily is the answer and the results are not going to win me an Oscar. Walking is complex and functioning muscles, ligaments, tendons and other soft tissue are essential to the process.

I have been known to take George on mini-adventures.  When I had to go to Woking to talk about anatomy he quite naturally came along.  It made sense to me, although George was non-committal and silent as ever.  Though I must say a skeleton on your back seat tends to get you noticed.

George remains cool no matter what.  Whether its sunglasses or a hat he is a picture of sartorial elegance, a real trendsetter. He’s a skeleton with a sense of style.

The Core of Everything

Jane Hebblethwaite
17:12 17 Feb 19
I have been under Gail's expertise for remedial and sports massage for nearly 18 months and would highly recommend her... to anyone. She has helped me recover from a very debilitating sciatica episode whilst also managing my neck, shoulder and foot niggles and mobility, with her fantastic massage coupled with excellent after care with her focused and planned exercise therapy sheets. She offers a very calm and friendly atmosphere and wonderful smelling therapy oils. A must for anyone, problems or not.read more

Beryl Miles
11:17 16 Feb 19
Gail is a brilliant practitioner. You cannot fail to benefit from her treatment. She is a true professional and can... pinpoint where your problems are and treat them successfully.read more

Anne Croft
09:45 14 Feb 19
Always feel much better after a massage. She finds any problems and soothes them away

Nicole Bourke
09:18 14 Feb 19
I go in feeling like a creaking old person and come out an hour later feeling ten years younger. I’ve always been... hesitant about having a sports massage as I don’t do any sport and therefore assumed it was for muscular sporty types. It has helped me though. Thank you.read more
See All Reviews
Close Menu