Even when I was a student with LSSM  during 2011, I had prioritised the Blenheim Triathlon over the London Marathon as the event I most wanted to volunteer for. The Triathlon seemed the perfect opportunity for some valuable experience at event work and find out about the soft tissue areas that needed attention, both before and after taking part in competition. Quite apart from anything else, being able to drive to the event with couch and all the things I would need, gave it a very clear advantage over the London marathon.

Having qualified in December 2011, one of the first things I did was check out the ISRM website to see what volunteer events were on offer.  As soon as I saw the Blenheim Triathlon listed, I applied to take part and was soon accepted. All too quickly the time passed, during which I set up my practice, Poise Sport and Remedial Massage, in January 2012 and started to see clients. Direct experience of providing massage therapy at a Triathlon event that involved swimming, cycling and running, I saw as both invaluable and complementary to my client’s needs. Many of my fellow massage therapists at LSSM are triathletes, marathon runners or take part in iron man competitions, so I wanted to see what they did up close and personal.

Having been accepted and realising there would be a very early start, I decided that rather than drive from my home in Loughborough on the day , I would stay overnight in a nearby B & B.  Once Tanya’s emails from ISRM started to arrive they gave clear advice on what was expected and what to take.  Increasingly this advice concentrated on an aspect that I hadn’t initially thought of for a summer event, namely the potential for mud, rain, wind, rain, cold and rain!

So getting ready for the event proved to be an experience in itself!  The key was preparation, although my checklist did start to take on a comic aspect once I’d dealt with the necessaries of towels, oils, couch roll and clock etc.   As my couch was going to be the most cumbersome thing to carry, everything else had to be as light and balanced as possible. The addition of thermals, weather proofs and a plan to stop my couch from sinking into a potential quagmire, however, soon started to dominate. My large Ikea bag soon became alarmingly heavy and I was concerned how I was going to get it all from the car park to the massage marquee. The whole thing had started to take on the feel of an expeditionary adventure.

On the day of the event my alarm went off at 5.50am to give me time for a good breakfast and arrive by 7.45pm.  Even though this felt really early, Blenheim Palace was already busy and full of competitors with bikes and boxes full of their kit. Thankfully the distance to the marquee was quite short, but even so I grateful for the helping hand from someone from Leukemia research – the charity for the event.  This proved to be very provident as our marquee had been moved.  The main sponsor’s marquee had fallen victim to the high winds the day before and blown away. Our intended marquee – which was centrally placed and part of the route to the start – had been deputised. Unfortunately, this meant we were now in a more isolated location and making it more difficult to find – me included. 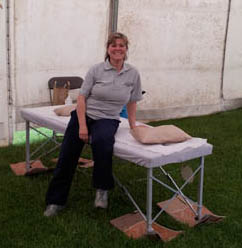 The team started to arrive,  although we were still a bit unsure whether we were in the right place. Their were 6 of us in total, with a mixture of 4 students and 2 qualified massage therapists.  It was  good to chat to the students from LSSM to see how they were getting on with their course. There was lots of nervous energy, combined with excitement for the day ahead and a few groans from the early start. Despite the confusion as to whether we were in the correct marquee, we decided to set up our couches just in case anyone turned up looking for a pre-event massage. Tanya, our ISRM leader, arrived and gave us some tips about what we could expect and what the competitors would be looking for. We were ready, but the poor location meant that not many sought us out for pre-event massage bookings. The ones that did, however, felt the benefit so much they returned for a post-event massage too.

On a positive note, it did give us a chance to see a little of the competition in action.  We were near both a transition point and the finish line. It was very exciting to see the competitors hurtling towards the transition area on their bikes before emerging for the run and the last stage.  The first view the competitors had as they started their run was actually the finish line and I couldn’t help wonder what effect this had. I would have like to see the swim race but this would have taken me too far from the massage area. 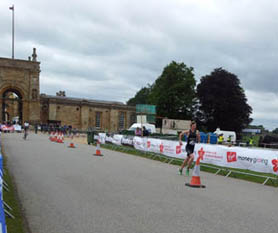 Returning to the marquee the slow bookings started to become more regular and we all swung into action.  The common areas for attention were aching legs, calves, shoulders and gluteals. Soon we we were all using lots of STR (soft tissue release), NMT (neuromuscular technique) and MET (muscle energy technique), alongside effleurage and petrisage to warm up and release those muscles and soft tissues.

Without exception, the triathlons reported they could feel the immediate benefits of sports massage to release their tired muscles.  One novice triathlete had found the waters of the lake to be so cold she told me she had never really warmed up.  This was evident from the hint of blue skin.  However, within 20 minutes she had resumed a nice pink colour and was feeling much warmer.  I worked on her calves and hip flexors and finished with a head massage to ease her headache. She left with a grateful smile

Despite the eagerness and appreciation expressed by all the triathletes I massaged, it became apparent that none regularly saw a sport and remedial massage therapist. I must say that the experience of receiving a massage, if only for 20 minutes, seemed to change that view.  All were grateful for the advice on stretches for the muscles that had been massaged and asked how to go about contacting a suitably qualified sports massage therapist as part of their training programme. Looking for a registered ISRM sport and remedial massage therapist was my recommendation.  My final advice to maintain hydration was met with knowing smiles, as I suggested they at least try to drink some water before buying that celebratory beer.

One good thing about our location was the junior competitions that were taking place directly opposite our marquee.  Youngsters from around 7 to 13 were gleefully running around a small track before taking to their bicycles. Some still had stabilizers but all seemed to be having the time of their lives.  A couple of the youngsters even came for a massage.  An ideal start for their future training! They certainly had the inspiration of the Brownlee brothers (Alistair and Jonathan) who broke the Blenheim course record by over 2 minutes with impressive race times of 57 minutes, 16 seconds.  I heard from those who came for a massage that they appeared to complete the race with ease, which was good news for the forthcoming Olympic Games. I find myself looking forward to watching the Triathlon even more now.

My final massage was a young student who hobbled into the tent around 5.45pm with some very tight calves.  Her training had been a little too intense in the build up to the event and she realised that she had pushed and overused her muscles a little too much as a result.  A short massage latter and my final client left feeling happier than when she arrived.  All that was left was to carry my stuff back to the car and make my way home, tired but very contented.

The Core of Everything

The Sciatic Nerve and Back Pain

Jane Hebblethwaite
17:12 17 Feb 19
I have been under Gail's expertise for remedial and sports massage for nearly 18 months and would highly recommend her... to anyone. She has helped me recover from a very debilitating sciatica episode whilst also managing my neck, shoulder and foot niggles and mobility, with her fantastic massage coupled with excellent after care with her focused and planned exercise therapy sheets. She offers a very calm and friendly atmosphere and wonderful smelling therapy oils. A must for anyone, problems or not.read more

Beryl Miles
11:17 16 Feb 19
Gail is a brilliant practitioner. You cannot fail to benefit from her treatment. She is a true professional and can... pinpoint where your problems are and treat them successfully.read more

Anne Croft
09:45 14 Feb 19
Always feel much better after a massage. She finds any problems and soothes them away

Nicole Bourke
09:18 14 Feb 19
I go in feeling like a creaking old person and come out an hour later feeling ten years younger. I’ve always been... hesitant about having a sports massage as I don’t do any sport and therefore assumed it was for muscular sporty types. It has helped me though. Thank you.read more
See All Reviews